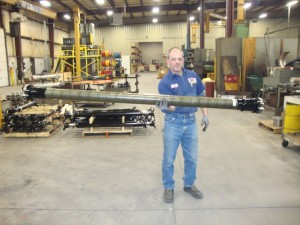 Carbon fiber drive shafts are becoming more commonly used in automotive, commercial, defense, industrial and marine industries.  They tend to be utilized in the most demanding and specialized fields because of their unique blend of capabilities, including:

Higher RPM – Driveline vibration is a common problem that can limit RPM. In racing scenarios, metal driveshafts experience harmonic whip, limiting usable RPM and forcing them to run the engine well below redline in each gear. A carbon fiber driveshaft was developed that allowed a 1000 RPM increase in useable engine speed and gave the engine a chance to work at its’ power peak. Since 1987, many racers in all areas of motorsports have discovered the extra RPM and the resulting tuning flexibility carbon fiber driveshafts provide.

Better Reliability – All drive shafts twist to some degree when torque is applied. The resistance to this twist is measured as torsional spring rate. Carbon Fiber (composite) drive shafts have a torsional spring rate a little less than aluminum and about half that of steel. The advantage of a lower spring rate is less driveline shock and a reduction of stress on other drivetrain components, as well as increased traction.

The continual twist when torque is applied eventually causes all metal shafts to twist very slightly. Over time, the shaft ends become permanently out of phase by several degrees and vibration begins to wear down components. Carbon fiber drive shafts, on the other hand, have a near perfect “elastic memory” therefore,  carbon fiber drive shafts cannot fail by becoming permanently twisted.

As RPM goes up, all drive shafts begin to whip. At a certain “critical speed”, unique to each type of driveshaft, this bending of the shaft creates lateral run out and vibration. This vibration is a primary cause of drivetrain failure from the transmission to the rear end. The “critical speed” of carbon fiber shafts is much higher than steel or aluminum shafts of the same size. Exceptional harmonic damping coupled with high lateral stiffness and low density combine to virtually eliminate vibration problems from shaft whip.

Increased Safety – Carbon fiber drive shafts are built for strength for torque transfer and can be broken with a hard blow from the side. The result is that when a u-joint or yoke fails, the carbon fiber composite begins to disintegrate when it contacts the chassis.  As the composite comes apart, the shaft simply turns into a bunch of loose carbon fibers instead of tearing up the driver and vehicle.

Reduced noise, vibration and harmonics – A smoother ride is easier on your equipment, and easier on the operator.  As a result, the carbon fiber drive shafts are subjected to less stress and tend to last longer.  The same can then be said for the other components of your powertrain. 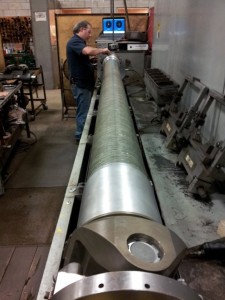